So I was fortunate to draw one of the limited bobcat tags in IL - I’m pretty excited as I’ve called quite a few in while coyote hunting the last few years.

That said - my coyote gun is a 243 but for this bobcat, I will likely be mounting it so I’ll be bringing out the 223 for this particular situation. I have a lot of 55 grain vmax but traditionally vmaxs have put a big hole.

Does anyone have a recommendation for a fur friendly 223 bullet for bobcats?

I have shot 2 bobcats with .223 40gr vmax @3300 fps. One had a big hole and one an acceptable hole. Shot placement plays a big part when shooting these smaller, more fragile animals. I don't have a better suggestion for the .223 unless you handload and can shoot reduced velocity, but I have read many having reasonable success using "standard" 55 gr spire points.

If it were me, I'd be taking a patterned shotgun or my trusty .17 WSM rimfire shooting a 25g vmax.
OP
S

Erict said:
I have shot 2 bobcats with .223 40gr vmax @3300 fps. One had a big hole and one an acceptable hole. Shot placement plays a big part when shooting these smaller, more fragile animals. I don't have a better suggestion for the .223 unless you handload and can shoot reduced velocity, but I have read many having reasonable success using "standard" 55 gr spire points.

If it were me, I'd be taking a patterned shotgun or my trusty .17 WSM rimfire shooting a 25g vmax.
Click to expand...

That’s a very intriguing thought…. I’ve been looking for a reason to pick up a 17 WSM for a long time. I know the bmags had issues early on but are they better now?
F

satchamo said:
... I know the bmags had issues early on but are they better now?
Click to expand...

I have had a BMAG heavy barrel for a while, so I can't say if they are "better". It was an inexpensive rifle that came with the cheapest of plastic stocks. The bolt action is quite sloppy and the rifle itself is rather ugly. I am happy with the trigger.

It is rather accurate and I have shot several of our larger eastern coyotes out to 150 yards with it (just don't expect much of a blood trail). I couldn't take the tupperware stock and so got it in a nice laminated Boyds (bedded) now - what a difference in feel, same accuracy. Topped with a Leup 2-7x, it is very lightweight. I don't go out shooting hundreds of rounds at a time, so I can live with cycling the crude action once or twice on a hunt. You can spend many, many hundreds more on a fancy WSM but I don't think you will improved "hunting accuracy" enough to justify it.

I shoot 50 grain fiocchi field dynamics. They are actually loaded with the hornady v max bullet but their load shoots way better out of my AR than anything else. I have shot a lot of fox with that gun and I think the biggest hole I have had was about an 1”. They do not do near as much damage as a factory hornady load or handloads with the v max.


Sent from my iPhone using Tapatalk
A

22 mag is the best option by a good margin. I've been very unimpressed with the 17s on anything bigger than ground squirrels.
L

I sometimes load up my 870 w/#2 lead or Hevi shot when calling.
Thats the largest I can use on State WMA's here.
OP
S

Dioni A said:
22 mag is the best option by a good margin. I've been very unimpressed with the 17s on anything bigger than ground squirrels.
Click to expand...

How much range does a 22 mag realistically have? Any rifle recommendations?

So I was sold on 17 WSM until I saw ammo availability, or lack there of.

I started using Barnes for everything years ago, they work great on predators with minimal pelt damage. I've shot fox's and bobcats with the 95gr LRX from a 6 Creed and it's just a little dime sized exit that can be easily sewn up. It you catch a rib or something you may get a quarter size exit but again nothing that can't be sewn up.

With the Barnes you've got a bullet that works on anything without fear of pelt damage so you can target multiple species with the same rifle and ammo. Doesn't matter with a little bobcat or fox or a wolf comes into your call, the result will be the same.

I know you are looking for a rifle load but it is very, very hard to beat a shotgun and hevi shot dead coyote.

you'll likely get better knock down power than a rimfire and they are definitely fur friendly. 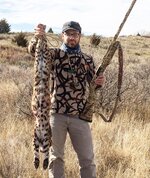 Dirtbag said:
I know you are looking for a rifle load but it is very, very hard to beat a shotgun and hevi shot dead coyote.

you'll likely get better knock down power than a rimfire and they are definitely fur friendly.

You’re not wrong, I definitely want to rifle hunt. I’m not one to want to carry 2 guns and I would rather have the range if needed. But that said - I bought. Cz457 in 17 hmr. I’d been wanting one for a long time so this was my excuse

Those CZ's have great fit and finish! And having one in .17 HMR just makes it that much better~!

I know it might sound counter intuitive, but give those 15.5gr Hornady NTX .17 HMR loads a try first on the Bobcat.

.223 Rem 55gr TSX at close range (25yd) for me, was pretty gnarly in terms of hole. Not that the Taxidermist had any problem sewing it, but the shot did hit the spine by the front shoulders and took out a whole section of the spine, so the hole could have been much much smaller.

Seeing how violently those 15.5gr have completely gutted rabbits where the shot was more toward the middle of the body... I'd bet that round we be just about right for taking out a Bobcat without ripping it up so bad.

You can also try to use the Hornady 35gr NTX .223 Rem, if you believe there is good likelihood of more than 100yd shot. It's hole size depends a lot on how much bone got hit on path thru the body. It's screaming along at 4000fps! It wasn't too bad on my last coyote, but the exit wound was a little bigger than the entry wound because the exit wound clipped the tip of the coyotes elbow on it's way out, so a lil bit more diameter, just because it happened to hit some bone. Left a GREAT blood trail out of the yote though!

But yeah, if I was purposefully going out for Bobcat, it'd be 17HMR with caller about 35yds away and calling them into within 50yds or less. Try out the 15.5gr NTX's or the CCI TNT Greens in 17gr. See which one you like better.

With the 15.5gr ones, first time I tried them out of my Savage 93R17, I set up an old spent 12ga cartridge I found on the ground. Set it onto a log LRF'd at 80yds away. Was able to hit it first try off the lil Kwik Stix shooting sticks. It's capable of insane accuracy that just makes ya feel like Zeuss throwin' lightning bolts around!

But I would say that if visibility is more limited in the terrain you're in, to like 50-70yds tops in any one direction... I dunno...I just might be inclined to just use a shotgun stoked with like... some kind of Duck/Goose load. Maybe a heavier than lead option in something like one of the top-3 sizes below BB that Duck/Goose loads come in. Like #1-thru-#3 perhaps?

Important thing with Bobcats is make sure you're sit spot gives you maximum FOV of the area all around your eCaller. They are soo stealth you can begin to stand-up from your sit you've been holding for 45min straight holding the rifle towards the caller, because your sit placement was poorly chosen... and as you begin to raise to standing (in full concealment gear)... you realize there's a Bobcat 8yds to your extreme right, laying down behind a piece of rabbit-brush! And DEFINITELY remember to try to put the morning sun into the critters eyes if you can! In terms of how you place the caller in the space related to where you are gonna take your sit at in the space.

If you've got concealment gear on, you've chosen your sit spot well, and you can hold still and not move much. You'd be amazed how much you can see and how much movement you can actually get away with around coyotes. But don't you dare make a sound they can zero in on, in-between the quiet parts of the eCaller playing! They sure seem to trust their hearing, a lot! So if you do have to make a sound, it better be extremely brief, quiet, and you better get ready to hold-still for quite some time after needing to make that sound. If the eCaller is still wailing all this time, and you've got the Motion decoy going, pretty quick they'll revert their focus back over to the Decoy and eCaller.

A shotgun with BB shot.
F

Bought myself a 5.56 for Christmas and plan on loading some
50gr. Speers down to 22 Hornet levels.
Should be good for Bobcat and also Yotes when they show up.

17hmr ammo is all over in Wyoming.
You must log in or register to reply here.

Logistical Tips and Techniques for Air Travel to Hunting Destinations