Colorado Parks and Wildlife have presented a new proposed map of potential areas to reintroduce wolves on the Western Slope, including Aspen and other mountain communities.
Eric Odell, species conservation program manager with Colorado Parks and Wildlife, said that the map is not final and will likely change before the December final draft presentation, but the stretch of land between Glenwood Springs and Summit County and south to Montrose and Gunnison provides an area that would have minimal conflicts as well as good habitat for gray wolves.
The map was based on some input from the technical working group and others working on reintroduction. Other constraints were 60-mile buffers from the Wyoming, Utah and New Mexico borders, as well as buffers protecting tribal Lands.


On the map, most of Summit County is marked as having high ecological suitability for gray wolves and a low conflict risk. Some small areas in the southern portion of the county near Breckenridge are marked as having a low ecologic suitability and low conflict risk.
Odell said the map presented was centered around areas suitable for a winter release, and the map of management and release will likely change if releases were to happen in summer months, since times of the year dictate conflict risk and management decisions.

Communities such as Steamboat Springs and Craig are not included on the map, but Odell said that does not mean that they are excluded from ever having wolves.
“The grayed out areas are not to be interpreted as areas where we do not want wolves,” Odell said. “This is just to constrain the area where releases will happen. We know full well wolves will expand beyond this doughnut hole and go into two areas both east and west of the Continental Divide, and they will inhabit that area. This map should not be interpreted as being the only places where wolves will be tolerated or managed within the state.”
Reid DeWalt, assistant director of aquatic, terrestrial and natural resources at Parks and Wildlife, said that there would be no one specific point of introduction, but instead there will be several sites where the state will reintroduce the species.
“It’s going to be very important that we talk to those local citizens. We actually talked about the stakeholder advisory group and the role that they can serve,” DeWalt said. “We don’t want this to happen in secrecy or in a box of any sorts. Communication to local governments to local citizens needs to occur, and I think you’ll see those conversations as we continue to hone in on this. There’s ranchers that need to be aware, and all kinds of folks that need to know this is where we may release wolves. It could be in your neighborhood (and) that type of stuff — just so everyone is prepared. This is the first step. We didn’t want to wait till the plan was all done and we want to start that now.”
DeWalt said it is unlikely that the wolves will stay in the general region where they are introduced, and it is expected that they will head toward the Front Range, other parts of the Western Slope and the Eastern Plains.
Currently, there is one pack that has been documented by the public in Jackson County near North Park, and Parks and Wildlife does not have any data on the wolf pack that recently lived in Moffat County. There is no evidence that suggests that the wolves were killed illegally in Colorado.
“In order to be successful in this, we want to have the highest likelihood of success so that we’re not dealing with depredations,” Odell said
K

pretty close to denver, awesome, maybe the wolves can eat a bunch of stuff in the suburbs.

Can we release a few in boulder on the land owned by the city of boulder? I mean it’s everyone’s dream to see a wolf in the wolf right? That’s why they wanted them? Bring them to the city so we can see them.

Disappointed to not see Denver and Boulder on the map.

Personally, I hope hunters and landowners shoot the piss out of them and then remove the collars and put them on a train like the Upers did up in MI. lol

If it's like Montana, for every wolf with a collar there will be 25 in groups of 5 that just appear about every 25 miles apart. When they disappear then a couple of US govt trucks will appear with the second planting. All vigerously denied by gov't agencies (state and federal). Our government is not our friend.

As a CO resident, and one that lives on the western slope, I have yet to meet a single person in favor of this nonsense. I can assure you that there will be a lot of wolves shot by landowners due to disdain for the governments actions.
L

Does good habitat and high ecological suitability mean this is where the elk are located?
OP
3

LostArra said:
Does good habitat and high ecological suitability mean this is where the elk are located?
Click to expand...

It does in areas like Summit County where there is little ranching occurring anymore.

The wolves have to eat, and if you purposely relocate wolves to an area with no ranching to mitigate predation on livestock, you‘ve got to have a food source to ensure the reintroduction is successful.

WE ALREADY HAVE WOLVES!!!! Let Mother Nature take its course and naturally distribute the wolves. Isn’t this what the idiots in Denver want?

Stupidity runs deep in large urban areas. Voting to support things like this that in turn effect ranchers, farmers and wildlife by introducing non native critters is asinine. shoot shovel and shut up. 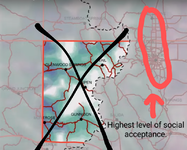 "According to a recent study, the green highlight areas offer the best wolf habitat and a higher level of social acceptance from nearby communities."

Doesn't matter where they put wolves. Look at other states where they did the same. In 5 years they will be all over the state but mostly concentrated near food sources like elk and deer. Say good bye to non resident tags

Havoc said:
Stupidity runs deep in large urban areas. Voting to support things like this that in turn effect ranchers, farmers and wildlife by introducing non native critters is asinine. shoot shovel and shut up.
Click to expand...

They were native before humans expatriated them.

Okhotnik said:
Doesn't matter where they put wolves. Look at other states where they did the same. In 5 years they will be all over the state but mostly concentrated near food sources like elk and deer. Say good bye to non resident tags
Click to expand...

The best place that they could have put them would be along the divide from Breckenridge to north of Grand Lake (RMNP). ("best place" since there is a place required)

Those guys would hop over into Estes and Evergreen and then people would get to see what their voting resulted in.

don’t worry plenty of wolves get shot and few get caught.
either you work with nature or you work against it.
wolves get blamed for everything since before little red riding hood.

displacedtexan said:
They were native before humans expatriated them.
Click to expand...

By the look of your name, like Texans as well.

Anti's get their way in Montana
2 3

Dec 10, 2022
swMontanaHunter
S
B
AI and the future of scammers