Congrats! Awesome bull with crazy fronts. For those of us who like to argue about cartridges and bullets, what did you use?
OP

BCsteve said:
Congrats! Awesome bull with crazy fronts. For those of us who like to argue about cartridges and bullets, what did you use?
Click to expand...


Sent from my iPhone using Tapatalk
I

Congratulations on a great bull

Any pics of that boat?

Idaho4x4Bronco said:
Incredible, she looks like a keeper too

I believe this is the boat they were using. Russian made inflatable Solar jet boat, they're becoming pretty popular up here. 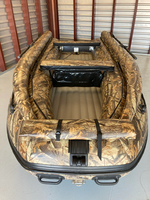 AK Troutbum said:
I believe this is the boat they were using. Russian made inflatable Solar jet boat, they're becoming pretty popular up here.
View attachment 458366
Click to expand...

Idaho4x4Bronco said:
Lol what the f...
Sign me up

Several of my buddies have them, and it's pretty impressive/crazy some of the shit they'll go through.

Congrats,
Great hunt , love hunting moose on the water. That bull has amazing fronts.
What engine and lower unit you running on your boat?
NWT

What an incredible bull! Nice work and congratulations!

AK Troutbum said:
Several of my buddies have them, and it's pretty impressive/crazy some of the shit they'll go through.

Okay, those are impressive. Crazy vids, you alaskan's are different lol.
OP

Boat is a 470 super jet and I’m running a 60/40 mercury. We went through very shallow water. An inch deep in a lot of the river. We got stuck a few times and I banged up my intake. These boats are too capable and it was way too stressful boating back with a load. We did 3 trips total. 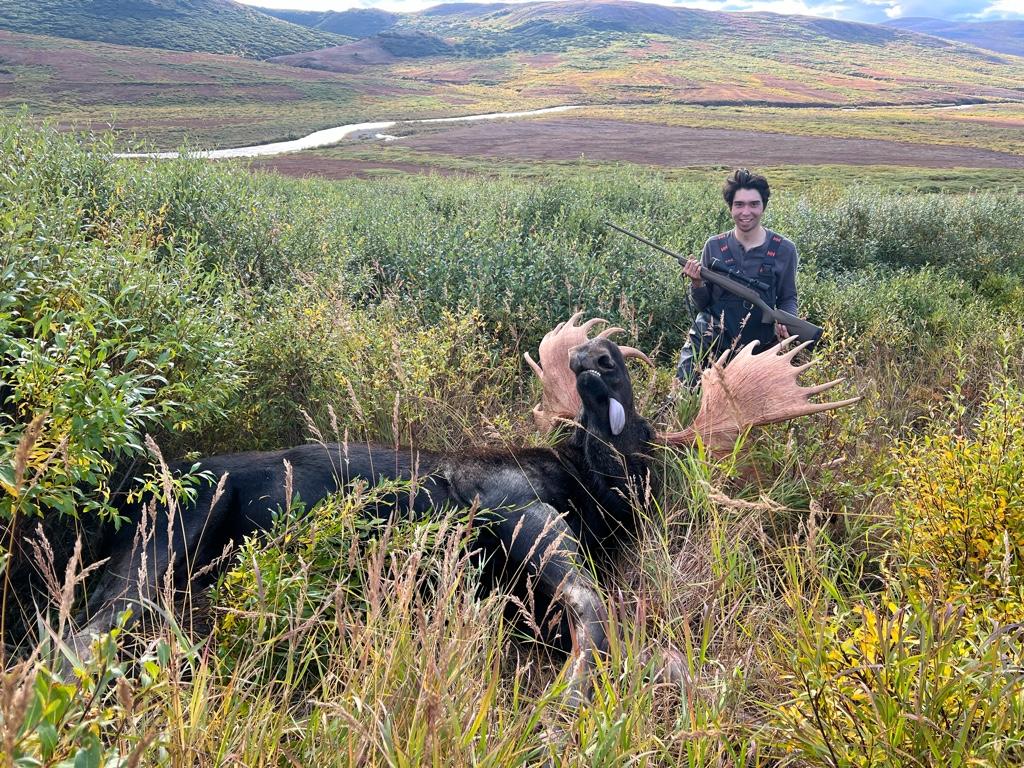 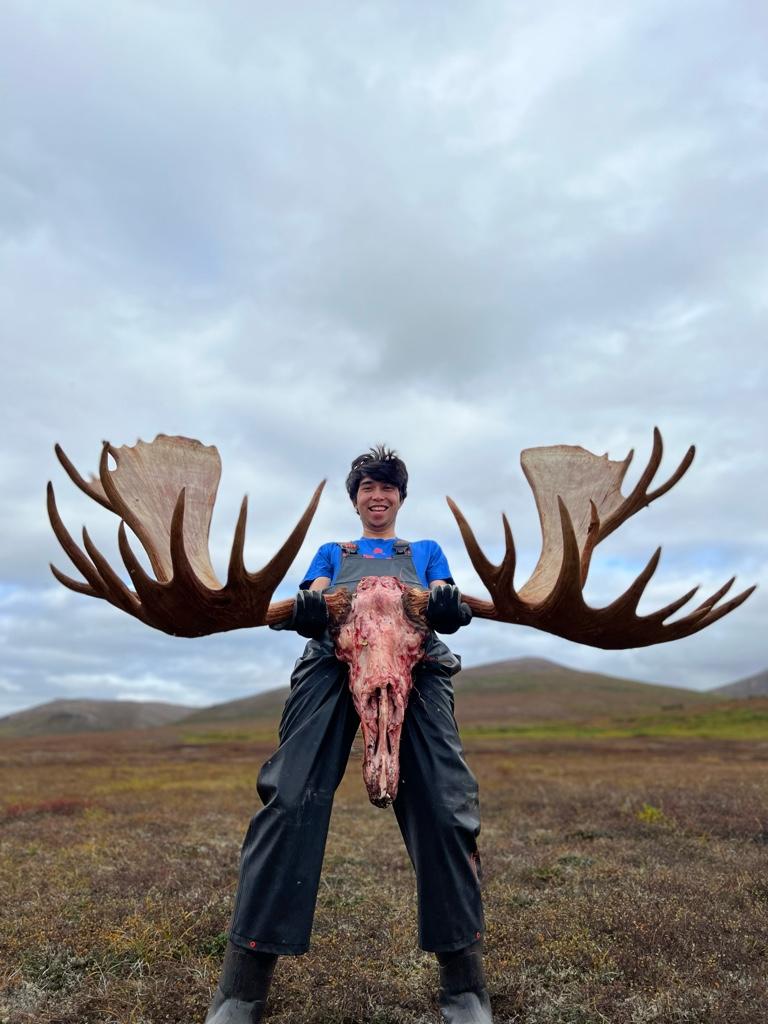 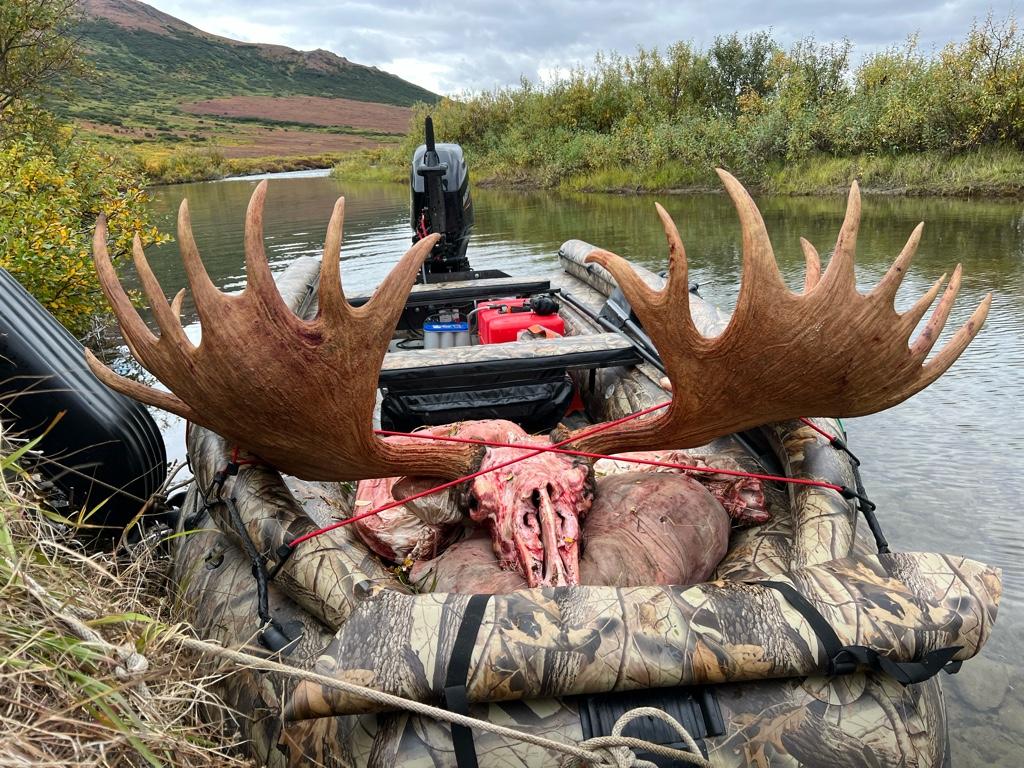 I’ve hunted moose for the last 10 years. I got my first moose at 11 and then got a few more with my dad and step brother. This year my dad bought a house and was busy moving in to it so he couldn’t follow hunting.

The first day, my friend, my gf and I went up a river where I scouted another big bull a week before season. By 7:30 am we spotted him and he disappeared in the brush to be seen 2 hours later. We saw him come out on the other side of the willows and decided that was our time to put a stock on him but he managed to disappear into the thick brush (I’m not sure if he was as big as this one but he was close). We climbed back on the hill and waited to see if he would stand up or move to an area we would see him. After 6 hours of no luck we went up river and scouted from another vantage point. Just a cow. We went back to where we saw the other bull and waited until dark. Boated down the river and drove back to camp.

The next day we got up at 5:30 am and were on our way up the river when the sun was coming up. We glassed all up and down the river and by 1pm we were getting anxious because our hunting area was closing at midnight. We decided to go to another river we knew there were moose on where no one hunted. We soon learned why no one hunted there. Big rocks, or 2 inches of water was really your only choice after the first 15 miles. We stopped in a few glassing spots and saw nothing. I thought we are not far enough up the river. We made it this far whats a little more going to hurt. Getting stuck and hitting rocks was a regular occurrence but coming around one bend I spotted two bulls. We pulled off the side of the river and watched them for about 5 minutes before we decided to try and get them.

By now it was 5:30pm, we were 32 miles up a shallow river, and saw two bulls 1 mile up a hill. I told my friend it looked like a long walk, remembering my dad telling me that shooting moose far from the river is a workout, my friend said we’ll worry about it later. We climbed the hill in to a view spot and when we finally got up there the wind was in our favor. We spotted the lower bull and wanted to see where the one higher was. We thought the one higher on the hill was bigger. After looking at the lower moose in my scope I told my friend we have to get this one. Got a range on him 550 yards. We wanted to get closer but had thick brush between us and him. We had to walk through it. After what seemed an eternity we cleared the brush to an opening and knew we’re within 200 yards of the bull we just have to find him. We walked up and down side to side. I had a feeling he was lower so I signaled my friend to come with me and we walked down. After 5 minutes of looking all over he stood up 40 feet away. Bang, Bang. Hes down.

Then the work began. He took 3 trips and probably weighs close to 2000 pounds. If you read this, I probably will shoot a moose far off the river again.


Sent from my iPhone using Tapatalk
Click to expand...

Congratulations. Nice story and a monster 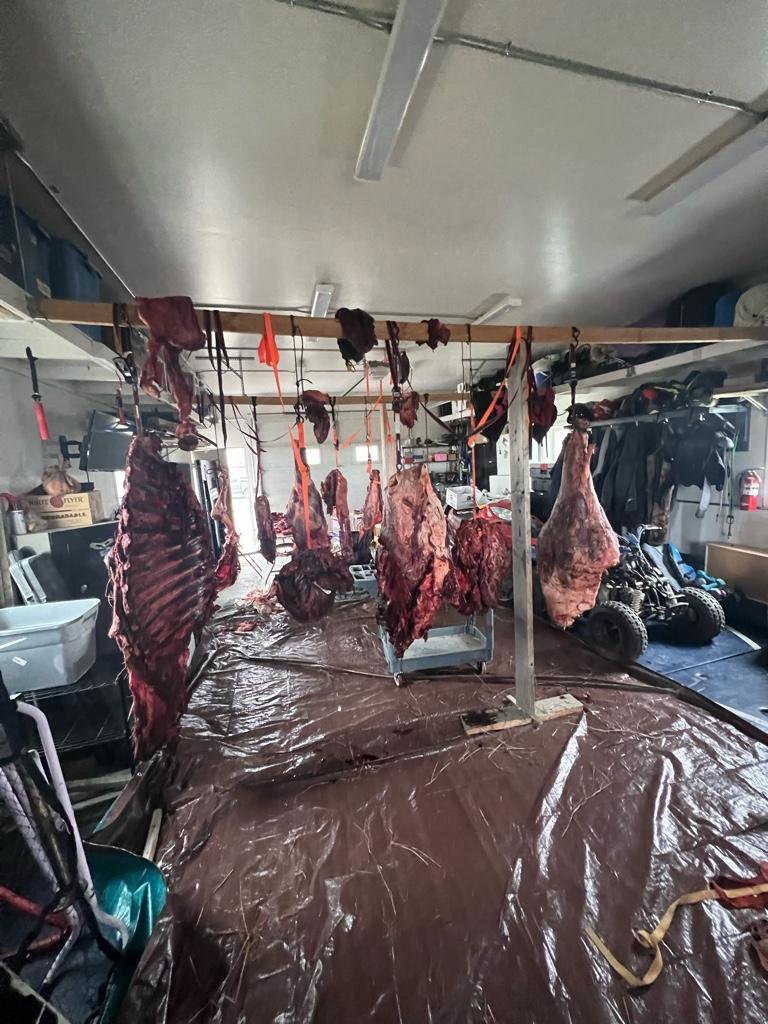 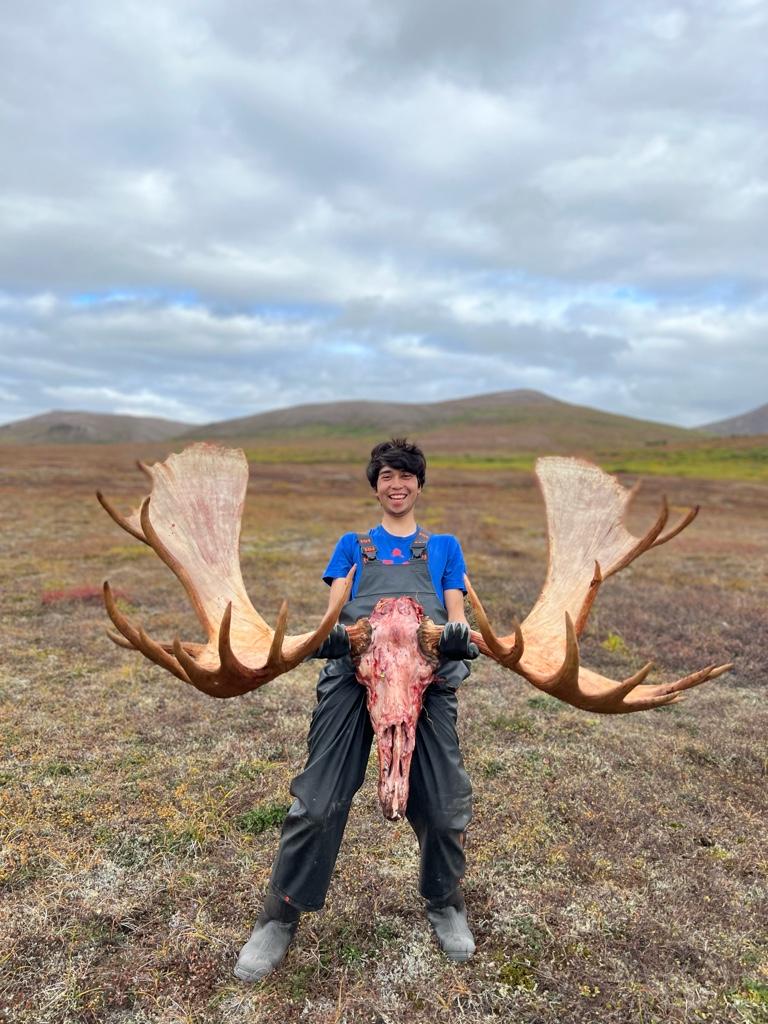 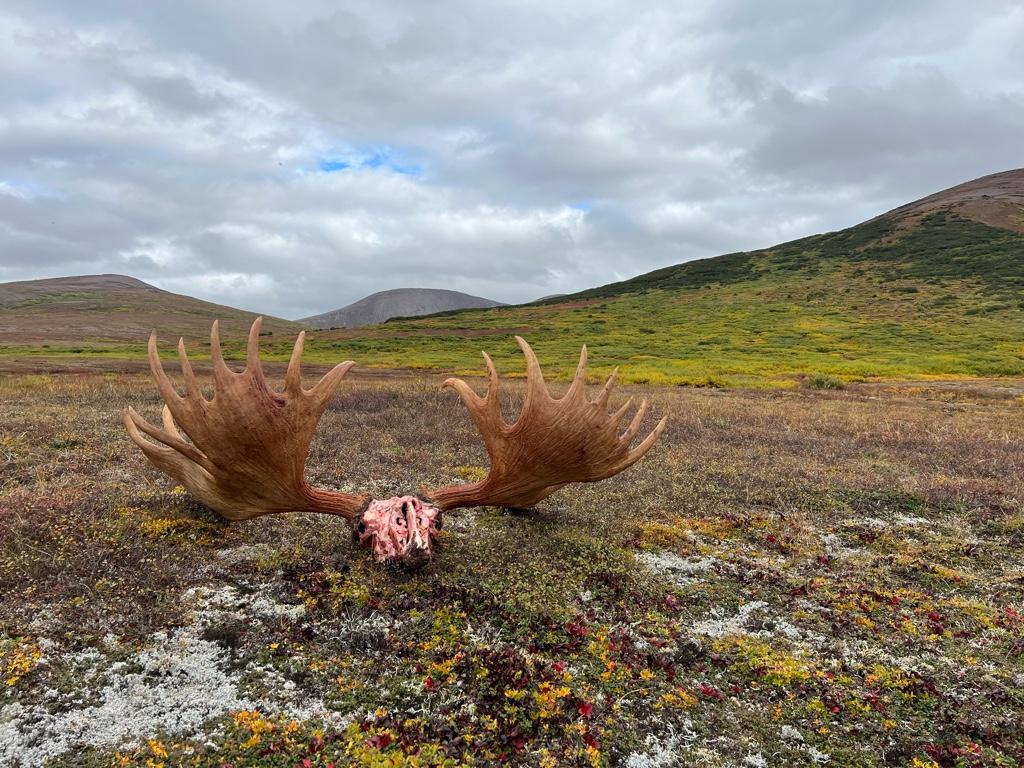 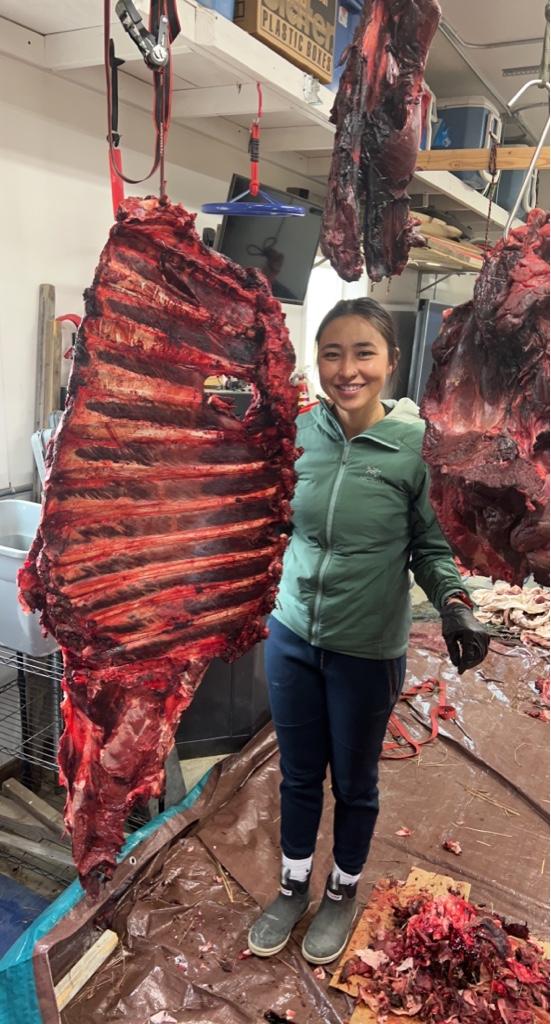 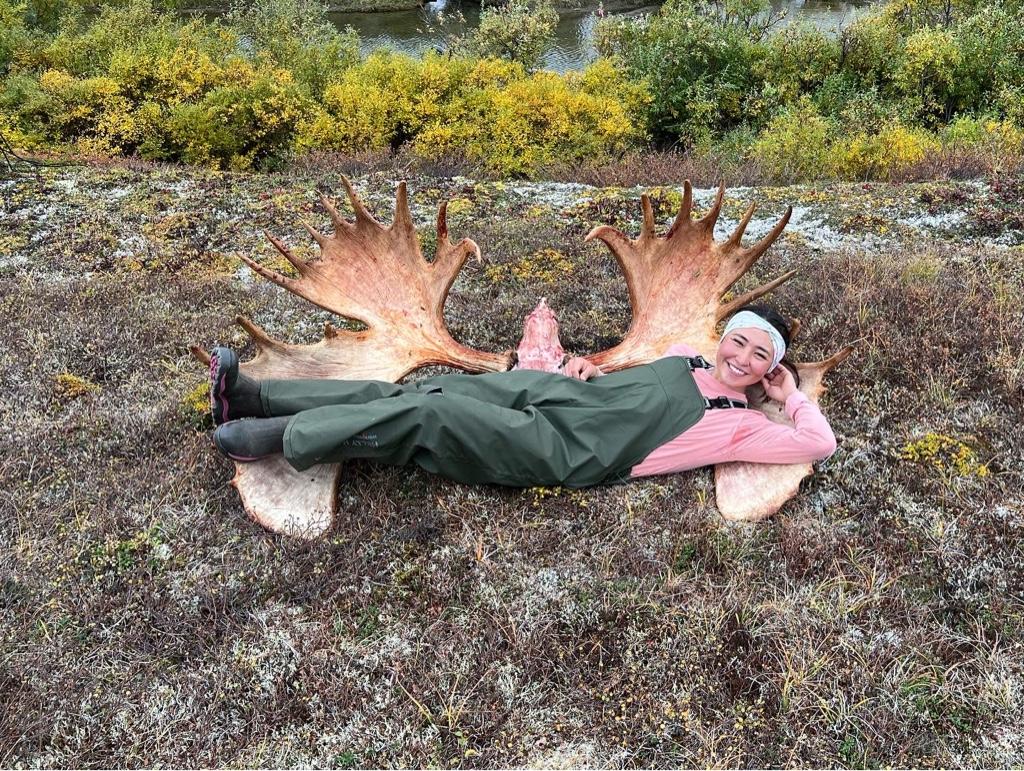 Sent from my iPhone using Tapatalk
Click to expand...

You are a lucky guy ! Love the pictures ! Your girl in the antlers is priceless !
You must log in or register to reply here.