School me on Ground Blinds

Looking to pick up a reasonable weight/price ground blind. It will be used for a doe hunt on my property and antelope hunts in the future. Only needs to be big enough for one person, tall enough to shoot a bow out of, under 20lbs, and be able to be left up for weeks at a time.
I'm not privy to what the current market is like, so I'm happy to be educated on what to look for. I'd really like to keep it under $200 for the time being, can I get a reasonable quality blind in that price range or no?
L

I’m not sure (big help, I know). I use a Primos Double Bull Deluxe when I hunt my fathers farm, deer and turkey. It’s a big blind and heavy. Fits two and weighs 35-40lbs. The materials, durability, and features are great. It will handle being setup for weeks at a time. Very sturdy frame and tight material. So maybe a smaller version would meet your criteria. But price would likely be $250-$300.
R

I am picking up one of these to try out this season but don’t have any real world experience with it. For the few times a year I’ll sit in one the price seems reasonable. 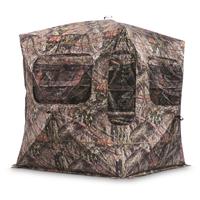 It’s probably bigger than what you need or want but has the sliding window system and 18 lbs.
T

I would avoid anything cheap. I’ve used cheap ones and they blow all over and get holes fast. A Rhino brand blind should be up your alley.

I only have one so not an expert. I agree with the post above to spend a couple of bucks. I hunted a friends cheapo blind and it was noisy and hot as a sauna. Felt like a shitty tent made of trash bags.

a few other points:

- stake it down, they can blow away
- sight it somewhere you can Approach it, enter and exit without blowing your target lanes
- practice from within it >>> I didn’t and didn’t realize I couldn’t shoot my bow from my seat until I went to draw. Ended up missing a shot opportunity on a nice buck. Had to shoot kneeling from a somewhat awkward and hunched position.

they are great for kids, new hunters and rainy weather, but I don’t use mine much. Too awkward to see and shoot from. I prefer to build blinds with camo screening material and use those.

You’ll get what you pay for. I have 4 double bull blinds, their double wide door model is the best blind I think they’ve ever made. Silent entry with no zipper. Sturdy. Quality materials, Warranty. I’ve tried 3 other brands that were cheap and although they are way cheaper, they don’t last long at all and I get aggravated every time I hunt out of it with the limited windows/viewing, noisy material, etc

I've got 5 ground blinds and I can say it's worth the extra money to get a Primos Double Bull blind. The Deluxe is too big in my opinion so I prefer the regular double bull blind as I have both. The cheaper blinds are really noisy and I can't hear the deer move with all the pine needles hitting the top of the blind but it's silent in the double bull. Wear dark/black clothes as the inside of the blinds are black. Set them up a fews days early if possible to air out and deer will be accustomed to it being there. If you can't set them up early spray them down. Put branches and brush against outside to help blend it in so it's not just a solid object. Clear the entrance so it's not noisy getting in. I use a set of three legged blind chairs which makes shooting a bow easy out of the blind. Use rocks to prop the front of blind up if you need more clearance for your shot especially slightly uphill. Started using treestands last year as scent control in ground blinds can be difficult with whitetails, they are very spooky on National Forest where I hunt the late archery season but ground blinds allow me to get the wife out there. Directions suck trying to set up and take down so watch a couple you tube videos and practice at home a few times before hitting the field. I've had a few wrestling matches in the field with these things and I'm sure my curses echoed through the county

A plant 2-3 T-posts before the season opens and then pack in camo netting to drape around it during the season. I stack some brush trimmings from clearing shooting lanes in front of it . Easy to cut a window wherever you need it and with t-posts brackets and a board you can easily add a shooting rail for rifle season.

Works better as a ground blind for me than any store bought contraption and allows me to better enjoy being in the outdoors. I'm in some form of box a good part of a work week. The last thing I want to do during my limited time to spend in the outdoors is to sit in another box.

You have already gotten some great advice, I'll put in my 2 cents worth. I bought a double bull years ago before they sold to Primos. I can't speak to the comparison between pre/post promos, but would say that there is a reason that pretty much every brand copied their design to some extent in my opinion. I have since bought / inherited / won 4 other blinds, but always go back to the double bull. I did set up a cheaper model for a spot that we can't get a tree stand into, and I know I will be leaving it out, heavily brushed in from now until the end of November, I did not want to leave my good blind out that long. That will be a blind that is used rarely. I think it was already mentioned, but for deer you want to either leave it where they can see it from a long distance or brush it in well. Again, my thoughts, I'm sure everyone does it differently. What I found out is just like a decoy in the woods, they don't like surprises! Long story short...you can't go wrong with a DB! Good luck, shoot straight.
You must log in or register to reply here.

School me on Snowshoes

School me on saddle hunting
2