Looking for a single burner stove that I can take on overnight ice fishing trips. Weight isn’t a huge concern but I am walking and pulling a sled so a run of the mill camp stove takes up a bit to much space then I would like.

I am just doing some prelim research and came across the MSR Group Stove. This is something I would be looking at. I am not looking to do a bunch of cooking but looking for something sturdy enough to toss a pan or pot on there.

Any recommendations would be greatly appreciated.

I just returned from a 6 day backpacking trip where i used a MSR Whisperlite international to feed 4 people daily. It is a single burner and uses liquid gas. We used a pint plus of fuel over the course of the trip. I have used this stove for over 30 years and other than some cleaning it has required no maintenance. The international can burn multille fuel types white gas, kersone, etc which can be handy. I have used majy other stoves that take compressed gas as well but always end up back with my whisperlite.
OP
R

Nevvon said:
I just returned from a 6 day backpacking trip where i used a MSR Whisperlite international to feed 4 people daily. It is a single burner and uses liquid gas. We used a pint plus of fuel over the course of the trip. I have used this stove for over 30 years and other than some cleaning it has required no maintenance. The international can burn multille fuel types white gas, kersone, etc which can be handy. I have used majy other stoves that take compressed gas as well but always end up back with my whisperlite.
Click to expand...

How do you think the whisperlite will hold up to a heavier pan or pot? Haven’t had my hands on one before.

I have a Whisperlite and have put 2 liters of water on top of it. I think it'd work for pans with a wider diameter, but you should still be careful with it.
L

I use mine ice fishing all the time. Fits in a pack with a small pan easily.

It allows you to simmer, which is nice for cooking actual food. It also is a torch if needed for melting snow.

The whisperlite uses three legs that rotate to the center when not in use. They are sturdy and have an easy set up. I have cooked with cast iron pans on mine as well as 2 liter water boiling at a time. I currrently use two 12 to14 inch pans that came qith my firebox woodburner that i bought. If you have an rei close or a store like it they will prob have one that you can check out with your cook pans. The lighting of it the first time can be freaky. Basically you flow raw fuel for a second. Light it and watch the flame jump up. It starts to heat the gas line and once the burner is going you turn the gas back on. I am describing it poorly but it makes it so that you that cold temps dont matter. I use mine with a bakepacker and make pizzas and thungs like that in the backcountry.
H

I'll vouch for the MSR Whisperlite for this exact use. I've had mine for over 25 years and used it extensively. While initially it was for backpacking trips or canoe trips in the Boundary Waters, I've also used it out ice fishing. As Nevvon says, the heating of the gas line by burning straight fuel in the bottom 'pan' ensures that cold temperatures won't prevent your use. The Whisperlite has been sturdy for me, just make sure you have a reasonably solid/level surface to put it on. The three legs create a stable platform for any likely pot/pan you may want to use and the stove is squat so it has a low center of gravity.

Ive used the (same) whisperlite for near 20yrs in all possible conditions, they are solid. It does one thing well: go full steam. I agree with others that a drangonfly or similar with a simmer function adds a lot more utility.

Most i know have gone over to the jetboil type stoves, including myself. I would recommend the wind burner if you are just looking to get hot water going quickly. It will boil water in a third of the time as a whisperlite, easier to setup, and less mess.

I have an Optimus Nova expedition stove that’s an absolute tank. Easy to adjust the heat. Can simmer. Sauté. Boil. Runs on any liquid fuel you can source. JP10. Diesel. Kerosene. White gas. Love it.

The whisperlite is a pretty standard stove for a lot of high altitude mountaineering. So it works good in low temps. Liquid fuel works better than iso fuel canisters in the cold and higher altitudes in my experience. I’ve got a dragonfly and am happy with it. Pretty much a whisperlite with more support for bigger pots and pans. XKG is another option. A lot of people complain they’re loud. If you’re just boiling water for freeze dried meals any little burner will work. Liquid fuel is great for cooking real food and who doesn’t like real food in the mountains? 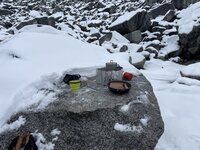 Considering that ice fishing season is in full swing right now, I assume the OP has already bought something. However, I've done plenty of cooking and melting snow in ice fishing hub houses, so I'll share my thoughts.


I definitely agree that you want a liquid fuel stove for ice fishing. Propane can work just fine, but you'll have to stay on top of keeping the bottles warm. Canister gas is more fuss than it's worth, and you'll just be burning the propane from the mix anyway. You'll be able to start a white gas stove as soon as you get your shelter up, even if it's 15 below.


In a liquid fuel stove, if you're just melting snow and boiling water anything will work, but if you want to be able to actually simmer and cook (even something as simple as heating canned soup), you'll want a stove with control valves both at the pump and near the burner. Sure, you can kind of simmer with a Whisperlite (valve on pump only), but really not compared to what a Dragonfly will do (with 2 valves).


Apologies to the MSR fans, but frankly it isn't worth buying MSR liquid fuel stoves anymore. I've used Whisperlites and especially Dragonflies many times. They work fine, but most models haven't been updated in 30 years, and competitive models just offer more these days. The best thing going right now is the Primus OmniLite Ti. A 2 valve stove that will match anything a Dragonfly will do, but for about the same cost it weighs almost half as much, packs down to less than half the size, has a pump that won't break (unlike the plastic MSR pumps which I've seen break in the cold), and will burn not only all the fuels a Dragonfly or Whisperlite will burn, but also canister gas and with a simple adapter, 16 oz propane bottles. Further, the OmniLite is available with a screw-in, interchangeable silent burner that is superior to the 3D-printed silent burners you can buy aftermarket for other stoves. The silent burner alone would make it worth it over a roaring Dragonfly. For sure in an ice shanty you won't be talking to anyone with a Dragonfly running, but an OmniLite can be as quiet or quieter than a Whisperlite, especially at a nice low simmer.

One thing specific to running a white gas stove in an ice shelter is the fuel smell you get stuck with due to the cold and limited ventilation. While the stove is running it's fine, but priming and shut down are stinky. The best choice is a stove that doesn't require priming, like the old Coleman's or Soto's Muka or Storm Breaker (I have a Muka; it won't simmer, but I think a Storm Breaker will). These stoves start with a fuel/air mix instead of priming, so no plume of open flame inside your shelter, and almost no fuel smell. When you're done cooking, close the valve, set the stove out on the ice, and let it die there to keep the fuel smell outside. Unfortunately, all of these stoves have become hard to find.


My favorite stoves for ice fishing are the old Colman single burners with the tank at the bottom. I think the model 550B Peak 1 Multifuel is the best, but they've been discontinued for a long time. The model 533 Dual Fuel/Sportster II was available a lot more recently, should be easier to find, and should make an excellent ice fishing stove.
You must log in or register to reply here.

Yesterday at 11:51 AM
aimlowshoothigh
A
B
In the market for a Ti or Aluminum Pot to boil & drink coffee from