Im no stranger to killing whitetails with my traditional bows, but getting a pass through that would exit all the way through and not stay inside the deer is something that rarely happened for me when I shot them through the rib cage. I draw 30in. Most shafts I shoot are full length or close to it. My bows range in poundage from 40#-60#@28. The past few years Ive enjoyed the lower poundage bows more. But one would think that even a 60lb bow I should be getting pass throughs every time. Last year I shot two nice bucks right in the lungs and rib cage and the arrow didnt even protrude the off side. Both animals died within 100yds. Blood trail was tough to follow. Arrows broken and bent along the way. (Easton Autumn Orange FMJ 470 full length shaft and 150gr Snuffer 3 blade. 15gr standard inserts) Pass throughs just didnt happen. It perturbed me too.

So this summer, after contemplating all spring and putting my own thoughts together, I started listening to Dr Ashby information on youtube. That lead to Ranch Fairy. Many of the things that I had decided and come up with on my own were talked about and explained by them in more detail. I thought heavy arrows meant heavy arrow shafts as in past years I had shot FMJs and searched for heavy gpi shafts. I changed it up and went with a light shaft and a heavy tip. What a better way for a new arrow set up than to get a new bow and new limbs. So I called Neil Jacobson and he sent me an Avian ILF bow and [email protected] limbs that he makes. I went with a VAP TKO 400shaft because it was light and straight, and it tuned a 95gr insert/outsert and 200gr field tip just perfect for me at 30in long. I put 3 feathers of 3 inches long on the back. Total arrow weight is 552gr. (Last years arrow weight was 495gr. So its not that big of a jump.) They flew true. Even with broadheads (VPA 200gr 3 blade). But getting an arrow to fly true wasnt the objective as that had been done in the past. I wanted a pass through. So this past weekend an opportunity presented itself and I made my shot. Hit my mark. The last thing I remember was seeing a black triangle behind the shoulder left by the arrow as the deer exploded away. The deer jumped 20yds or so and stood for a few seconds before falling over dead. I waited a few minutes and got down to find my arrow. I looked but couldnt find it initially. I walked back and forth from the area he was standing to the deer looking for my arrow along the way expecting to see it laying on the ground or inside the deer still. The 3rd time I walked back I looked up to see my arrow sticking out of the dirt. It was buried 4 inches deep in the ground. I was very surprised. This is the first time an arrow of mine was buried in the dirt like this in 20yrs of shooting them with traditional equipment. Maybe Im late to the party. But it all happened just like I heard that it would. Light arrow, heavy tip, arrow buried in the dirt, animal dies 20-40yds away. Im a believer. I dont know if the same set up would be ideal for bigger animals or not, but Id shoot it tomorrow at bigger animals with confidence until I learned that it didnt work. 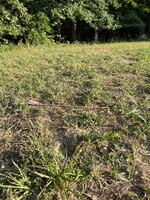 Wow nice deer and congrats on the success. A friend of mine is just starting his Trad journey and I am trying to convince him to move up his point weight some before he starts to hunt.

I'll forward this to him, thanks.

When I lived back east I hunted with a #50 samick sage. I used 340 shafts with a 250gr tusker concord 2 blade. I always got a pass through. The most impressive was a doe at 20 yards that blew through both shoulder blades and burried in the dirt.

I think with traditional equipement in the whitetail woods where you do not expect a longer shot, a heavy arrow will fly quietly, hit hard, and just plan kill. No downside in my opinion.

Out west with a compound I am not in the ultra heavy arrow camp.
B

Great deer and congrats on the blow through!!

Awesome That setup works well in the eastern part of the US for me. As I hunt the west I have to lighten up the front a little for potentially longer shots. That’s why I carry a mixed quiver. It works well.

First off - congratulations! That is a heck of a nice buck! Second, welcome to the party! I've been shooting trad for nearly 50 years. In my experience, if you shoot arrows that are north of 525 grains, you will almost always get a pass through. Good luck the rest of your season!

Ammons ? Fantastic buck. Didn't we shoot at Tannehill together awhile back?
OP

Sapcut said:
Ammons ? Fantastic buck. Didn't we shoot at Tannehill together awhile back?
Click to expand...

Richie from Georgia who was telling me and my buddy John about shooting 700gr arrows???

Haaa. Yes but also from Alabama near Mobile. We had alot of fun that weekend and my young boys, then, will never forget you guys. Yes we talked alot about heavy high FOC arrows. You may remember you and John shot my arrow from each of your bows and it shot great from all three bows ranging from my 71#s to maybe yours was about 50#s.

And your sister was on American Idol, as my boys would mention.
OP

Sapcut said:
Haaa. Yes but also from Alabama near Mobile. We had alot of fun that weekend and my young boys, then, will never forget you guys. Yes we talked alot about heavy high FOC arrows. You may remember you and John shot my arrow from each of your bows and it shot great from all three bows ranging from my 71#s to maybe yours was about 50#s.

And your sister was on American Idol, as my boys would mention.
Click to expand...

Such a small world. As I made up this arrow, I was talking to John about it around early August and he brought you up and told me about making a heavy arrow that year after you told us about it etc. Way cool to make contact with you again after about 10yrs now!

Looks like you have a great bow/arrow setup resulting in a fine animal to show for it.
OP

Sapcut said:
Looks like you have a great bow/arrow setup resulting in a fine animal to show for it.
Click to expand...

I sent you a pm
M

Nice looking buck. Congrats on the success with going heavy
You must log in or register to reply here.