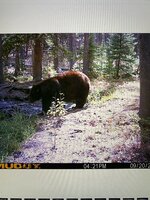 IMO it was kind of a dick move on your part to stay if he was already there but hey, it's public land... and 800 yards is a pretty good distance between you. On the other hand, if the guy was really serious about wanting to kill an elk why TF would he leave an hour before dark? That's prime time!?!?

All’s fair in love and OTC hunting! You did nothing wrong. Neither did anyone else. We’re all public land owners. If we want places to ourselves we have to work harder to get there.
B

Biggest mistake I see was not properly explaining that the shot the first day was a brush shot.

Had a guy shining a flash light at me last year and waiving for me to go away.

I had a deer tag and they had elk tags.

i dont think you did anything wrong, if i was working a drainage and had seen anaimals i was after in there i wouldnt be going anywhere but everyone is entiled to their own opinion. He pulled a crappy move moving in after he heard shots, im with others in thi thread that go the other way when i hear shots.

Btaylor said:
Biggest mistake I see was not properly explaining that the shot the first day was a brush shot.
Click to expand...

"I heard a noise and thought I saw something move so I fired off a shot in that direction just in case, but my rifle jammed so I couldn't unload the whole magazine so probably cost me a bear."
OP
C

Btaylor said:
Biggest mistake I see was not properly explaining that the shot the first day was a brush shot.
Click to expand...

I'm not a naturally dishonest person and wasn't prepared for him to flag me down and ask me directly. I definitely wasn't thinking he was going to send someone down there.

Won't happen again. I don't plan to be rude, but like Forest's mom said..."A little white lie ain't ever hurt nobody." I've already made a call on a suppressor.
B

You shot it after he left so you are not wrong. Unless you positioned yourself in a way that his elk would smell you. The nail could be coincidence but could also be a smart way to vandalize.
V

Unfortunately, this happens all the time and has happened to me more than once. Since it is public land the right thing to do is find somewhere else to hunt, if the area cannot support more than one group of hunters. That's life on public land.
V

Just to clarify, if it is bigger country in there and you're not messing up his hunt than it's fair game.

Something to learn in every thread.
J

If I would have done what you did my dad would have tanned my hide and not let me hunt the rest of the season. 100% unethical in my opinion. You should have gotten their earlier and hunted someplace else. I've had people tell me they were planning on hunting the next day, but then ended up seeing something else and going a different direction/etc having plans changed. If you would have check your gun after you dropped it you wouldn't have missed 3 shots and then wouldn't have had to explain your shots. This is the problem with the new generation of public land owner hunters. They have no respect for peoples space and hunting. If you are beat to a ridge, leave and go find another ridge and beat the guy the next day.

Something to learn in every thread.
Click to expand...

"Brush shots"
Sounds as good as the guy I ran into on the mountain years ago who told me he got some "Sound shots" in the day before. He heard something in the woods, so he shot in the direction of the noise. I asked the rough area they were hunting, and I made damn sure I wasn't anywhere near there the rest of the week.
H

Ill make it easy.... don't use etiquette and hunting in the same sentence.....
B

go_deep said:
"Brush shots"
Sounds as good as the guy I ran into on the mountain years ago who told me he got some "Sound shots" in the day before. He heard something in the woods, so he shot in the direction of the noise. I asked the rough area they were hunting, and I made damn sure I wasn't anywhere near there the rest of the week.
Click to expand...

I've been hunted over and I've done the same thing to others. It's public land. I'm not going to ruin my entire day because someone else is there. Most of the time when there is someone else there, that's as far as they go and it's about where I start hunting.

If I am just starting out my travels for the day, I will not intentionally hunt the same area if I know someone is in there. I usually have a few options and will just go to the next one. But if I have ridden or hiked for good to hunt an area and encounter someone there, I'm still hunting.

Well, I had something similar happen the previous year in the same area. We spotted a bull the evening before the season a 1/4 mile from the road. So opening morning, despite my better judgment, we set up. We were there an hour before daylight. Just before dawn a truck stopped right next to me and 2 guys get out and start walking down the flattop ridge we're on. (Maybe 250-300 yds wide) I flash a light to let them know I was there. They split and flanked me on both sides. Each guy was about 100yds from me. Even though I was at the apex of the ridge, together, the covered everything I could see. The guy to the right shot. Don't know what it was. He started looking for it immediately and begins walking in front of me as his buddy comes to meet him. So I got up to leave. He asked if I would give them a hand. My response: "Nope, you found your hunting spot, you can find your animal." That's not normally me, but I wasn't happy being cut off. 100% jerk move IMO.

This is a big burn area, so it's very open. We stayed and hunted for several days, and each day someone would come within a few hundred yards of us. Usually they would be dropped off by someone and just push through the brushy areas while shooters were staged along the top of the ridge. By the third day of this, we left. The feeding sign in the burn area was thick, and fresh. So it was obvious there were animals nearby.

That's what drew me back this year, but we hiked almost 2 miles in through some thick cover to check a grassy valley I saw on the map. Nobody around for 3 days until the day after the old guy flagged me down when we shot. Last year there was 20+ vehicles in the area. This year, maybe 5 or so.

Typically, they ride the roads during the early morning and late afternoon, and will stomp brush during mid day. I never saw anyone away from the road until the guy moved in after hearing our shots. It's all Juniper and scrub oak, so shots carry in the area.

I'm going to make discretion more of a point next year. Hopefully avoid any conflict. I appreciate all the feedback from you guys.
You must log in or register to reply here.

Should I have used a call?