What a great adventure...and thank you for sharing it with us!!! Cordova is a uniquely marvelous part of Alaska...you definitely chose very wisely!

Mountain goat hunts are the most memorable for me, primarily because I did two with my son and another with my daughter.

Great story and congratulations on great long hair goat. You were wise and chose a great place to hunt and YUP, goat hunting is tough and hard work. Great trophy. Congratulations
4

ryjack70ss said:
Two years ago my buddy and I booked an Alaska goat hunt for 2021. We were looking for an adventure. I had never been to Alaska or a backpack type hunt like this. I was hoping for a trip that would be hard, to be able to do something others can’t or won’t.

Unfortunately my buddy hurt his neck and needed surgery so we had to postpone until this year. Dennis at Lonesome Dove out of Cordova was awesome throughout the process and very understanding. We flew in to Cordova and met the guides and packer at the airport and they took us to check zero on the rifles after traveling. Once finished we checked into a hotel and got settled. The guide picked us up and took us to Dennis’ house to finalize paperwork and have an awesome home cooked meal and a few drinks. We settled back in at our hotel and got some sleep. The weather was bad the next day as it seemed to rain nonstop. We had a small break in the weather so my buddy took off. It started getting foggy again so we hunkered down. We finally got another break in the weather so we headed to the small float plane. My guide, packer and I all loaded in and flew to our spot. We set us base camp and then pushed up another 2 mile hike to set up spike camp. We walked through the muskeg which was cool because I have never experienced it. We bushwhacked through blueberries and raspberries. We climbed steep mountains, all while raining. It was everything I expected it to be. This was the start of the adventure I was looking forward to for 2 years. We couldn’t hunt that first day since we flew, so we got into our tents, wet obviously, and got to bed.

The first hunting day was actually beautiful. The sun actually came out for a bit. It was nice as our first day was nothing but rain. I actually got to see the scenery and beauty of Alaska from 2500 feet at the spike camp. It was breathtaking to see snow capped mountains 360 degrees around us. After soaking it in, I put on my wet boots and we hiked on. We had to wear crampons for part of this given all the rain. This was also my first experience with those. They were awesome on soft ground. Rocks…not so much. My ankles made it clear that they were not versed in crampons on rocks. Once we got to the top of the ridge we saw a black bear. It watched us for a minute as we took a short breather and we mushed on. After going up and down and up and down along the ridge, we spotted 4 very large mature billies. There were a couple others across a canyon but we couldn’t access them. We started our stalk and they were unaware of our presence, but for some reason they made their way toward a large cliff that went nearly vertical. Our guide calls it “the end of the world” because we cannot pass that. We put a rush on and they were already to high to get a safe shot. We spotted another black bear at the bottom and assumed that was likely the cause of their skirmish. We watched a bit as those goats climbed nearly straight up with ease. Now we had to make some decisions because this location ends here. So our outfitter was notified and suggested moving locations. We hoofed back to spike and packed up and headed down to base camp. The weather was starting to get foggy again at this point. We called Dennis on the Sat phone and he got ahold of a pilot to relocate us! So far we were 6 miles of hiking in and we were now on another plane. The awesome part of this was that we were going to the location of my buddy! He had shot a Billy not too far from their spike camp early that first morning so there was still a lot of goat country there. 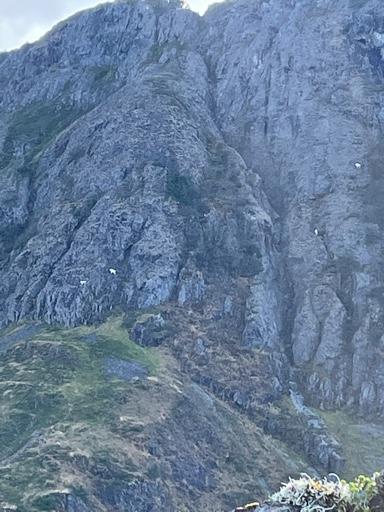 When we landed, my buddy didn’t know entirely the plan and was pleasantly surprised to see us. They loaded his goat meat on the plane after we removed our gear. He still had a black bear tag so he and his guide and packer stuck around and already had much of camp set up. So we hiked to base camp after a long day and now it was raining, again. Something that was awesome was his guide brought veggies and they picked hedgehog mushrooms on the mountain and we ate goat backstrap stir fry over ramen noodles. Delicious. By the time we went to bed, much of my clothes and gear was wet on the inside from sweat and on the outside from rain, and I loved it. This was exactly what we were looking for.

It was great we flew when we did, because the next day was full of rain and fog, and we likely would not have been able to fly, therefore we would have lost that day, plus the next because you can’t hunt the day you fly. We got lucky. I could actually hunt on day 3. 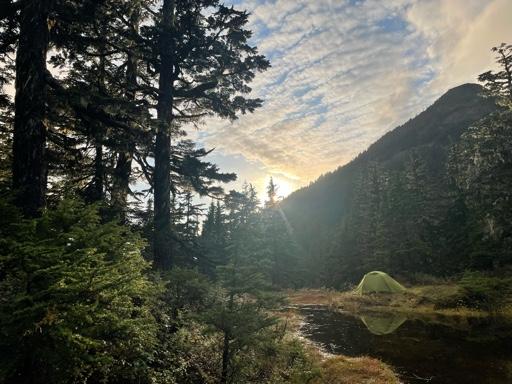 Day 3 we saw where my buddy shot his. He went that way again with his team to try and get a bear. My team pushed up the mountain another 1000 feet. When we got to the top, it was foggy. We sat up there in the rain and fog for 7 hours and had about 40 minutes of visibility if one bowl past the ridge we were on. At this point we also ate most of our snacks because, well, there was nothing else to do. The packers would then on be referred to as snackers. So we decided to go back to spike camp, wet, but at least we were below the fog. At this point, it is hard to explain the wet. Everything is wet. There is no way around it. The experienced guides seemed to embrace it, so I tried to do the same. I tried to dry my base layer and clothes in the tent. That’s hard to do when it’s 40 degrees and raining. I felt my hat that I hung in the tent actually got wetter by the time I woke up. I did something though that I read about and that’s go to bed I. The sleeping bag with your wet clothes on. That actually worked pretty well! I also tried putting stuff in the bag at my feet. Unfortunately that did not work so well. Those items were still soaked in the morning. Oh well, time to put the wet boots back on and keep pushing. Time to embrace the suck.

Day 4 was actually quite nice. Not sunny but clear visibility. Got some great views and great photos. We went back up to the top of the ridge again where just 24 hours earlier we couldn’t even see 100 yards.

We went back up there and, no goats. So we went down the backside and up the opposite side of the bowl. No goats. Went to the next mountain and this one was STEEP! Crampons are back on at this point. No time to rest this time as the forecast for the next day is pretty bad. So we pushed on. At the top, we started seeing some goats. One was a nice Billy but not recoverable if we shot it. So we followed the ride around and saw a small goat. Too small to shoot. So we circled back and saw 3 Billy’s and a nanny. They were about 1000 yards away at this point but o e or two look like shooters through the spotter. So we dropped down on the other side of the ridge and sidehilled closer. We popped up and one Layed down and we lost sight of two and the nanny was farther and higher, but also layed down. So we stuck to our plan and kept on the opposite side of the ridge and got to about 200 yards. I set up and they looked through glass to ID the largest of the 3. 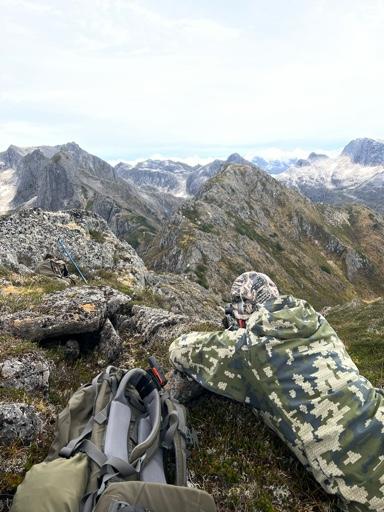 He ranged at 208 yards. I was zeroed at 200. Boom baby. I was surprisingly calm and waiting for the go ahead from the guide. He said the middle goat was the largest. He turned broadside and I squeezed the trigger. Clear hit. He started walking up a vertical cliff, so I put one more in him and he dropped. We all took a breath and shared our excitement over an epic few days. My buddy and his team were with us too and he got to share this experience with me. His goat was much closer to camp so he was equally excited to have this experience. It ended with exactly we were hoping for, beautiful Alaska, rugged and treacherous hikes, wet weather, and a touch of suck.

After the hike out, it rained the whole next day. We got a hot shower and a great meal at Dennis’ house and with all the guys and had a great time talking about this awesome experience. I cannot thank Dennis and his team enough for for being just a great person, the great hospitality and the awesome hunting experience. I cannot recommend him any more highly. His awesome group of guys made the experience truly spectacular. I hope I have another opportunity to experience something like this again, hopefully with my kids coming along to share it with them. 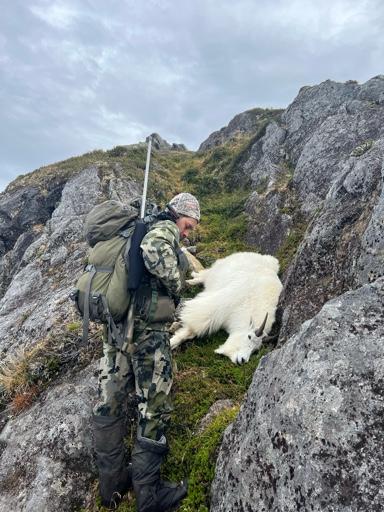 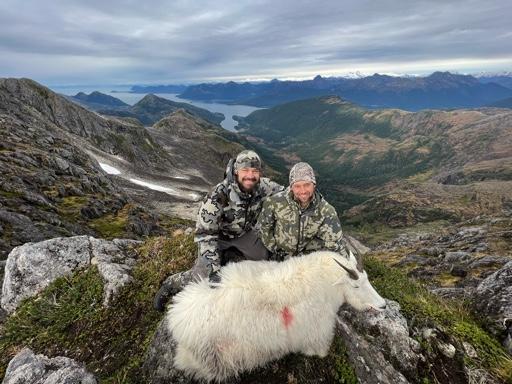 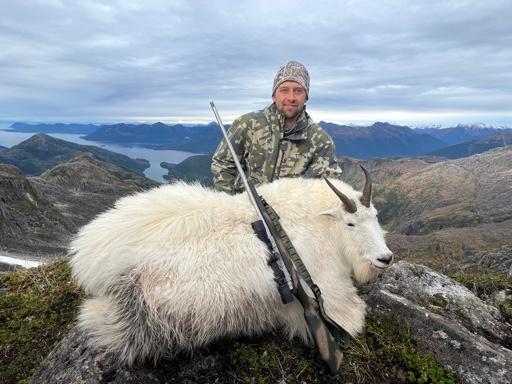 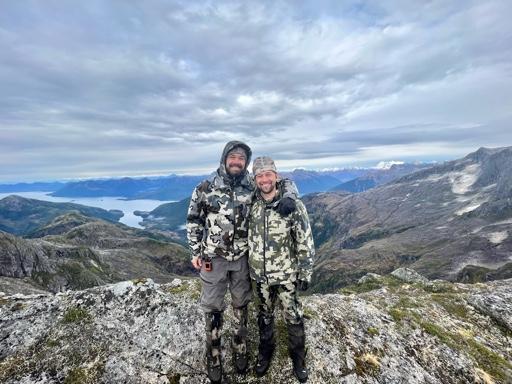 Great write up about your hunt. Im heading to Cordova in September and this just gets me more fired up for the experience . I went to Alaska for the first time last thanksgiving to Kodiak for a deer hunt and Alaska far exceeded my expectations. Congrats on a beautiful goat.
R

Awesome! Thanks for sharing, I have spent time in heavy rain in Prince William Sound, but it sure is beautiful when the sun is shining.
You must log in or register to reply here.

A Booner black bear with a bow