Roksliders,
I'm at it again. A few of ya know me, more don't. AK resident who hunts recreationally self guided. I like to hunt bears.
Soon I'll be launching my boat from Ketchikan and running among the islands of South POW island, a aprox 100 mile run. I'll be crossing the broad southern end of Clarence Strait with the goal of rounding Cape Chacon to access the islands and bays of the designated South POW wilderness. I don't have a specific camp location in mind. I'll be reading the weather and waters as I go to find a centralized location that will provide five days of quality ocean based bear hunting. The tactic is to be withing striking range of broad swaths of coastline with a favorable wind. I use the windy App to strategize and adapt to the daily flux in wind orientation. The camp is a light 12 p Tepee with wood stove and it will be on a peninsula or island, a skiff run away from any primary hunt zone, scent management and all! I use a pair of light weight pack rafts mostly, so hiking deep into tidal zones or river flats is on the table. Sometimes I'll do a mid day hike with a poor wind strait into an estuary....Wait/fish/nap, then pack raft out late evening into the good wind to sneak in the back door of high quality estuary. Walk in the estuary on the waterway! I'll be archery hunting and my partner will have the boom stick. Anyhow....I wanted to start a thread like I did last year for Kodiak kinda building interest and look forward to sharing with like minded hunting folks when I return. I'll get back on Rokslide after I return and share how reality lined up with best laid intentions. Should be a fine excursion and the spring here in SE is shaping up nicely. We chose later May to ensure grasses had popped and we'd have a better opportunity at nice weather. Type with you bear hunters later!

Sounds perfect. In my opinion it's hard to beat salt in the air. Look forward to hearing about the adventure and hope your travels are safe.

What are you using for an offshore boat?

19 ft Workskiff.... It's all tricked out for coastal work but if the swells get 8ft and there's wind chop I'll be tuckin tail and heading for a calm bay. I'll be limited in the event of foul seas. Most of the time its manageable and with modern forecasting I'll be picking a nice weather window to make the aprox 3 hour run.

Always love your posts, especially your trip reports. Thanks for taking the time to share this hunt with those living vicariously through others’ adventures!
OP

Okay Roksliders....I'll get to it and letcha know how this hunt went down. The weather window was good and we were able to make the big 70 mile run from Ketchikan around the South end of POW in three hours. For you guys in the lower 48, think of this trip like a long jeep backcountry excursion. One of my friends calls my skiff the CJ Magnum cuz I push it and run it into spots that are rough and dangerous like some guys would do with a tricked out Jeep. So on the west side of POW there's heap of wild rocky islands and narrow rippin tidal races. The joy of challenge with exploration in a good skiff is like jeep play, just exciting!
I'm a bear hunter. I have hunted bears all over SE AK. I just wanted to roam into a new zone with no previous intel and figure it out. I really had no idea what the habitat was like or the game populations other than Google earth and the topo maps I had reviewed. It was just a hunt to get nice Black Bears. My partner, Craig wanted a good specimen, clean coat and boar. Simple enough! I wanted one archery style with a clean stalk and shot, Boar too but not too concerned about size and willing to stalk a normal bear.

We arrived and tried out four different beach zones to recon as camp locations. Most had long beaches and rough timber patches. Finally we found a good peninsula camp with a great landing beach, a protected bay for anchorage and a clean ground patch for the large Tepee. Getting camp up was a breeze as we've done it plenty over the years.

That evening we started the process of looking around. We motored around and spotted plenty of bears. One particular bear got my attention out on a rocky peninsula with bull kelp bunches, flotsam, and driftwood. It was larger than most and when we got close it disappeared but not before I saw the girth of it's ass. Yup big boy! Next day, more stalks and just overall good times looking and attempting to outsmart bears. No shots fired. Day three came and we had three morning stalks and one large bear was at 50yrds for Craig but It zigged and he Zagged. We were anchoring and using a packraft to get in tight but many of these bears had residence in U shaped beach zones and the winds would swirl most times. One thing we noted though is the bears were very loyal to their locations and would return later only slightly outa posistion but in the genral area for a second crack at em. Fun stuff! We decided to make a go at the big coastal bear. To do it we decided to set off shore and patiently drift across the shoreline quietly. First pass was quiet. Second pass and bamn, there he was but with the wind blowing strait to him. So we fired up the boat and played possum like we was leaving and he stepped out again. Only we flanked behind a peninsula to stalk overland to get the wind in our favor. It worked and Craig put him down with a single shot from a 416 Ruger at aprox 70 yrds. It was a beautiful beach and the success had us happily collecting beach treasures to accompany a fine coastal Black Bear. We rolled him in the bow with some effort and made for camp where we quarter and skinned.

The next day I was up for a chance. Shortly after leaving camp mid morning we spotted another fine bear in the same bay with the wind in my favor. I got to shore and to a rocky point where I knew the bear was just beyond. I peaked over to see him at 20 yrds. I backed down, collected my breath and stepped softly forward to see him gone! I swore he winded me only to step forward a sconch, and see him on the peninsula rocks at ten yards, head down navigating the uneven rock. I came to draw without his noticed and a frontal as my target. He kept coming!!!! At 10 ft, literally directly in front of me, I had made some kinda calculation about how to place that arrow to lance the Carotids and enter the thorax weaving inside the clavicles. I sent it! The bear reacted astonished and left a undeniable blood trail to collapse just inside the trees.

The wolves came in that night and let us know we shared the bay with em.

This hunt went pretty much flawless. 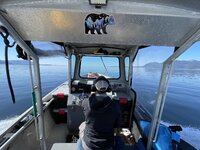 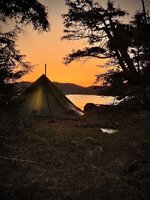 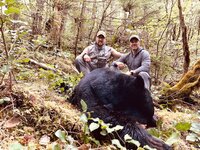 Sent from my SM-G973U using Tapatalk

Gotta love when a plan and a little luck and willingness all come together.

Thanks for sharing. What a great time of the year to be out.

Looks like an incredible hunt. Thanks for sharing with us!

They both look like good bears, but the first looks like a giant! What a beautiful beast!
P

Epic adventure with some great animals and really nice pics. Appreciate you taking the time to share!

Great hunt! How are those spring coastal bears for eating?
OP

Surprising to me, yes, these bears are tasty. They are on the to do list for processing. It’s a total surprise, as my experience to date is that coastal bears are rank. These prepared like a nice beef. We quartered em up quick, cooling, and kept em clean and in game bags. Both animals were in optimal health it appeared.

Great hunt! Congrats to you both. I took my first bear up there in AK this spring in the side of the ocean. I can’t wait to go back.

nice! thanks for taking us along.

Very well done sir! POW is a truly unique area, and the bears down there can get HUGE. Thank you for sharing your adventure with us. Beautiful hides on those beasts and without any rubs that I could see from the pictures, nor thinning around the back of the paws. Did you guys measure the hides? Just curious what they squared, but it's not important...the adventure was an awesome story and incredibly well done sir!
B

Wow, what a cool hunt. Some serious skills and moxie


Sent from my iPhone using Tapatalk
You must log in or register to reply here.