I had so much fun hunting coyotes with my Brother @dirtytough last January that I'm making the drive back to ND for another hunt. I'm driving through Montana now and should make it to his place this evening. I'll post updates throughout the week so hit the watch button if you want to follow along. 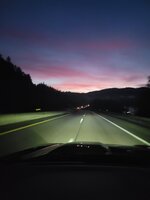 Hope you have a blast.
OP

weekender7 said:
Hope you have a blast.
Click to expand...

Making my way through beautiful Montana. We got up early this morning and spent most the day in SD looking for a buck since Branden has a deer tag down there. We saw a few bucks but nothing real big. 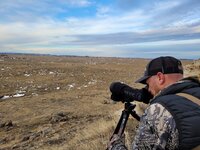 Just before dark we got my rifle dialed in with one of his extra thermals. 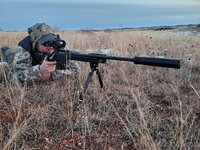 Now we are headed back to his house to grab all our night gear and then we'll head out and try a few stands. 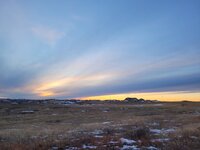 What gun/bullet combo are you using this year (same as last)? Good luck!
OP

Skerhunter said:
What gun/bullet combo are you using this year (same as last)? Good luck!
Click to expand...

This time I'm shooting a Tikka .243 with the barrel shortened to 18" and a Rugged Radian suppressor. The chassis is the XLR Element 4.0 and the thermal is a Bering Super Yoter.

For ammo I'm shooting 95 grain Berger Classic Hunters at 3100 fps. It's my deer and antelope load for that rifle. I'm hoping it doesn't tear them up too bad but we'll see.

Last night we made a few stands and saw some coyotes but none came into range. It was a little strange since the conditions seemed good and a buddy called in and killed a triple not far from us last night. Hopefully tonight will be better for us.
B

I hope you record some video, standing by for FUR down.
OP

I can't remember off the top of my head what the charge is but I'm using Hodgden Hybrid 100V.

weekender7 said:
I hope you record some video, standing by for FUR down.
Click to expand...

No video tonight but we killed a couple before the wind started getting nasty. 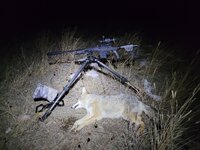 Wind is still blowing in ND so we made the trip into MT for the night. We just got all our puffy layers on and are downloading a few more maps on onX before we head out.
OP

We've made six stands so far and saw coyotes on three of them. One of the scanners isn't working for some reason so that's making things harder. Two dogs down so far. Heading to another area to try a couple more stands. We ended up finding a couple good looking spots and made two more stands but no coyotes unfortunately. Now we're on our way back for some sleep. Oh ,.. to be young again . Staying out all night , chasing tail , hoping to drop your load , I miss those days .

We still talking about Coyotes?
OP

Tough night tonight. Wind was forecasted again so we drove about an hour and a half to the Northeast in hopes of a little better conditions.

When we got there the wind wasn't bad at about 8-10 mph. We called in three coyotes on the first stand and I had an easy shot at one but I totally screwed up. I was trying to turn on video recording in the thermal and instead brought up the menu. At the same time, the coyote turned and I thought he was getting ready to take off. I totally panicked and smashed the trigger which resulted in a miss! I was pretty frustrated with myself for that one.

We made another five or six stands as the winds continued to increase and never saw another coyote.

The saving grace for the day was the badger I was lucky enough to shoot on the way out this afternoon. We were in a hurry to get to calling so I didn't take time for a photo in the field. Better weather early on tonight. We got six stands in before the wind started cranking and called coyotes in on three of them. We ended up killing four but really should have had seven or eight. Oh well, we had a good time and saved some fawns. 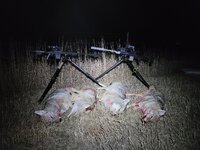 Justin Crossley said:
Better weather early on tonight. We got six stands in before the wind started cranking and called coyotes in on three of them. We ended up killing four but really should have had seven or eight. Oh well, we had a good time and saved some fawns.

Thanks and good luck! Be sure to post a thread and let us know how it goes.
You must log in or register to reply here.