Anyone solo backcountry hunting over the age of 60?

A guy I know from bowsite is in his mid 80s and still does solo backpack hunts. He's a stud.

I have a friend who packs in 15 miles with horses and kills his elk every year.
Solo in heavy grizz country. He is in his early seventies.
He also got a RM bighorn ram this year but was not solo.
F

Yes. Live and hunt in the Adirondacks and turned 66 this year. Hunted Maine by Jackman for the first time this year and had a great time. Hunting and fishing by myself are my favorite ways to spend time in the woods. Probably going to have to start fully boning whitetails (have a knee that gets angry) instead of quartering for the pack out but thankful to still be out there. Don’t go as fast as I used to but see more (of it all) while I’m out there. Still guiding hunting and fishing and hoping for a bunch more years. Don’t let fear and doubt prevent you from doing what you want to do. Be realistic in your personal expectations and enjoy every day that you’re given to enjoy what’s out there.
S

I’m 60 this year and did one solo in Colorado and another upcoming in Montana. As mentioned a little more concerned if it’s warm and not spoiling meat. Just don’t have local friends to depend on for western trips. So, screw it im going to go regardless. I’m also a type 1 diabetic and have severe sleep apnea fortunately I’m very knowledgeable, prepared and aware of these with high activity and altitude.

I am trying to stack the deck so to speak, so far rifle only and not trying to pack camp in. Did truck base camp and use my feet, slower and safer. I can spike out no problem a night or two as long as no deep snow.

So far I’ve enjoyed this year. Have yet to kill an elk tho. That ticks me off so much - so I’ll have to go again.

63 in couple of months and hunt on the border Az and Mexico, inreach is your best friend when hunting solo. My wife isn’t real happy with me, but been doing it for years.
KNOW YOUR LIMITATIONS YES IM YELLING THIS!

There's nothing wrong with doing it... you just have to follow a more stringent protocol is all. Like ensuring making sure fam knows where you're going. If while you're out there traversing the space presents you with something sketchy... simply put.. don't do it. There are LOTS of really sketchy choices we make when we're younger and don't know any better as to the possible outcome of making that choice.

Also make sure you have meds to support you out there just in case you get jacked up. I have an opiate Rx and bring several in my med kit for out there, because I've had things happen like footing slipping crossing a creek which resulted in a shattered wrist 4 miles in. Just as an example. And I've racked up a good amount of trauma to various parts of my body from Weights, Motos, MTB, BMX etc. And that all has a price. In my instance when I got Covid it re-exacerbated my lumbar discs. So now that's another part of the equation I have to work around and plan for each and every time I go out. As a result, now I normally just do day hunts because of it, simply because I won't be able to sleep well at all on the flat ground due to the discs issue.

But heck man, if you don't have anything like that going on then FFS Heck Yeah you can do it!

It's not the age man... it's the mileage and damage we've racked up along the way.

it is nice to see who the ol pharts are.

at 65 i was killing elk by my self. that was several years ago.

last year [ with 70 in the rear view mirror] i was going strong in the back country. [ but in the saddle] call it cheating if ya want but i am out there.

this year i just finished taking my nephews boy on his first back country trip. i really dont know for sure what he thought but he did not whine. and he put in 30 miles in the saddle with no past riding experience. we stalked a doe and he made the shot. then packed it 5 miles and 8 river crossings on the horses to the truck.

took me 2 days to recover.
OP

GSPHUNTER said:
I would have to ask, how do you feel about it. are you in better than average heath and shape, do you do strenuous exercise regularly, have you had any health issues which would give you reservations about making such a trip. If you feel like you can do it, then go for it.
Click to expand...

Good health no issues and I train leading up to the season. Had a stress test 6 months ago and they said most guys my age dont get as far as I did so. Actually this is my predicament, I don’t feel old, but I look at guys my age and I wonder am I in denial.

def90 said:
Get an InReach and keep on keeping on.
Click to expand...

Had one for years

Carry an aspirin in my pocket too. 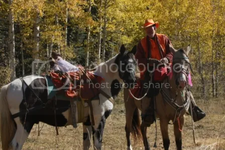 went back at 67 and the altitude got me. took some diamox and was sure that stuff was going to kill me. guess my time in the hi country is over.
D

rayporter said:
View attachment 484394
went back at 67 and the altitude got me. took some diamox and was sure that stuff was going to kill me. guess my time in the hi country is over.
Click to expand...

well it is not that easy now. i spent a day in SantaFe and a 2 in Pagosa and camped at 8400 before trying to go high.

Scoot said:
A guy I know from bowsite is in his mid 80s and still does solo backpack hunts. He's a stud.
Click to expand...

Congratulate him. He is definitely the EXCEPTION to the rule by MANY years!
F

hflier said:
Anyone solo backcountry hunting over the age of 60?. Still feel like I can do it, but it seems that I don't see many doing this and I am wondering am I pushing it too far? I have 100% odds on a Arizona 6A Elk Archery hunt this year and I am trying to decide if solo is a good idea. I did this hunt 10 years ago solo and had a blast, but I was 10 years younger.

Have you hunted or scouted 6A before?
E

Yup. Did it last year at 67, but overworked my body in the spring and summer and got whacked by sciatica this year. Could not get it resolved in time for my normal hunt but I am still hopeful to get a short trip in the first week of Jan during late ML.
R

Archery hunting (if it's warm) you'll want to very carefully consider how you're going to get meat cooled before it spoils. I usually figure four loads with a bull, if push came to shove, you might do it in three.
Click to expand...

You're a better man than me - takes me 6 loads for a bull. Of course I only shoot big ones.
OP

fmyth said:
Have you hunted or scouted 6A before?
Click to expand...

I can’t believe I didn’t see this sub-forum before!

I’m 67 now, and planning on doing an 8-day guided moose hunt next year in N. Alberta. It is a bucket list item for me. I have asked to do a spike camp away from the lodge as it’s a 2 hour trip each way on a UTV. I don’t know if the guide will be joining me or not at the spike camp. I will be taking an InReach with me and will also rent a sat phone.

I’m dealing with a medical condition called Fibromyalgia that I can control well with medication. This will most likely be the only chance I’ll have to do this, so it’s now or never.

If (when) I take down the moose, the guide service will do the pack out for me.
F

hflier said:
Yes I have, hunted in 2013. Had lots of encounters, but did not get it done.
Click to expand...

I'm a resident. Have hunted 6A twice and spend a considerable amount of time in the unit every year camping, hiking, and riding ATV's. This unit is not what I would consider remote. You'd have to try hard to find a place where you could get more than a couple miles from a road. I think there are around 700 tags issued for archery in this unit. You can find a lot of elk within a mile or two of the road. I wouldn't be concerned at all about hunting this unit solo. The only downside to hunting this unit solo during archery is getting the meat out quickly as the temps can get into the 80's during the day. With any luck I'll be in the unit hunting elk with my bow in 2023.
You must log in or register to reply here.

G
Battery System for the Back Country