I’ll start with that I didn’t pick this tag, the tag picked me. During application time, I applied for elk, sheep, and mule deer (so I thought). All three of these species had long odds and I was expecting to bank a point. My plan for mule deer was to put in for archery mule deer in unit 3A and 3C.

During the summer my card got hit and I was extremely excited to draw a tag that had a 2.6% chance. However, after logging into my account I found out that I drew a Coues deer tag in unit 24B. I must have accidentally typed in 1094 instead of 1194. After some research, I realize that this is tough hunt (lower deer density and rougher AZ terrain) that could have been drawn with zero points. I didn’t purchase point guard and I spent the next few months debating on if I was gonna eat the tag or make the drive down to Arizona.

I’m an average hunter from Minnesota that just started hunting out west. My first two trips were elk hunting, in Colorado and Idaho, that were more like hiking with an expensive hiking pass. I was around elk but never put myself in position to have a chance. Earlier this year I went to Montana on an archery antelope hunt and had an amazing experience. I unfortunately wounded an antelope and found him after the coyotes did.

I finally decided to drive the 26 hours from Minnesota to unit 24B, solo.

The drive was miserable. It took my 46 hours to get down there when including sleeping and working from the truck one day. I have a mattress in the backseat and lived out of the truck for the entirety of the trip. After arriving at one of the spots I escouted, I meet two local hunters that were about to pack in. They were very friendly and gave me some pointers.

I woke up the next morning and hiked two hours up a creek bed towards the top of the mountain. After a mile or two the hiking turned into climbing. These mountains were a-lot steeper than I expected. From everything I read, I was lead to believe AZ mountains were nothing like Idaho and Colorado so I didn’t train nearly as hard. However, this was just as steep, if not steeper.

I finally got towards the top and glassed over a bench and towards adjacent mountain faces. I didn’t see anything and then the fog rolled in. I decided to go all the way to the top to rest/eat some lunch. A group of local hunters hiked over the other side of the mountain and I talked with them. They asked me how I got there and they said they didn’t think it was possible coming from that direction and have only seen two other hunters in the last seven years. They were extremely nice and told me I was in the right spot as they’ve shot some here in the past. They even told me they’d come grab me if they saw one they didn’t want to shoot.

After seeing some sign and talking to those hunters, I was making a plan to go back to the truck and grab three days of water and food to camp out on the top (assuming I didn’t get anything that night).

I continued to glass until dark and finally found two fawns chasing each other on a bench below me. There followed a doe and finally a buck! Because of the steep drop below I was expecting them to be a half mile away when I was surprised to find they were only 450 yards. I knew it was a decent buck but since I only had 10x42s I couldn’t tell exactly how big, nor did I care.

I contemplated what to do since this was on the edge of my range that I felt comfortable with. I decided I would shoot from right where I was sitting. I couldn’t lay down and get comfortable since I was on a slope so I set my pack standing up and rested the rifle. I dialed the scope to 450 yards and tried to find the buck. At this time only one deer was in the picture and the others were over a hill. Because the sun was in my face, there was significant scope glare and I had to shield the scope with my hand. After finally determining the deer was the buck, I squeezed the trigger.

I couldn’t tell if the deer was hit because he was over the hill before my scope came down. I decided to look for blood right away since it was getting dark fast. After finding exactly where he was standing, there was nothing. I continued to look and still, not a drop. I finally determined I missed and made my way back to the truck.

Only about 70 yards from where I was looking I came to a deer trail and noticed there was a speck of blood! Followed by more and more. I got around the side of a hill and a deer jumped up. I noticed it was severely wounded and was hardly able to walk. I couldn’t get off a shot and he went over another small ridge. I hurried over and saw the deer tip over and put another round into him to finish him off.

This was the first time I have quartered out an animal and took me a little longer than most. I finally got him on the pack and started my way down. I spent the first 0.75 of a mile going down steep nasty terrain, with a lot of it on my butt. It took me just over three hours to hike the three miles. The body was feeling it the next few days and I couldn’t imagine packing out and elk.

If I was ever to do a trip by myself again I would bring a satellite phone, just in case. Overall it was a great experience and extremely rewarding to complete by myself.

Congrats man! Heck of a way to take advantage of a goof up.

Hey, nice deer. I had the same tag as you last week and was successful as well, however. I chose the unit. It was also my first time hunting in Arizona too. I hear it on the steep terrain, but it is the loose rocks and that damn cat's claw that was my nemesis! Try it solo at 64 years old next time. Now that you've done it, would you choose that hunt again? I know I'm putting in for it again next year! I'd be curious what part of the unit you were hunting....maybe we can swap notes. Congrats on a nice buck! 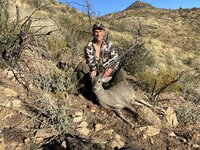 You sure made the most of the situation. Going up the steep side of the mountain - you earned that buck!

It really is awesome when you/I run into friendly hunters in the backcountry. My CO hunt was like that and it really helps make the hunt run on a more positive note.

Nicely done. That unit is a rough unit. Big country, brush and is generally far more vertical than a lot of other places. Not much water either. I live on the edge of that unit and that country is no joke. Once again, well done.

That is definitely a happy accident. Way to get it done on a nice Coues. That is one of the next hunts on my radar.
L

Never hunted the little deer, but from what I am told that is a nice coues buck, congrats. Sometimes we take a gamble and it pays off. Good deal.
OP
T

lonedave said:
Hey, nice deer. I had the same tag as you last week and was successful as well, however. I chose the unit. It was also my first time hunting in Arizona too. I hear it on the steep terrain, but it is the loose rocks and that damn cat's claw that was my nemesis! Try it solo at 64 years old next time. Now that you've done it, would you choose that hunt again? I know I'm putting in for it again next year! I'd be curious what part of the unit you were hunting....maybe we can swap notes. Congrats on a nice buck!

Congrats on the deer, lonedave! That's quite the accomplishment to complete by yourself. I hope to be hunting the backcountry at 64 like you!

I currently do not have plans to hunt Coues deer in the near future. Right now I'm collecting points in various states out west and I'll probably be hunting elk in Colorado and Wyoming over the next few years. However, I do plan on going on two trips a year so it might be an option in the future. I don't know if I would pick 24B specifically. I do believe I would see deer in the same spot and have a good time. It would probably depend on who I would go with.

With respect to the friendly locals, I won't say too much about the location. I will say that I was in the Superstition Wilderness hunting the Woodbury burn.

Congrats! Great story, and I'm sure you'll be triple-checking your hunt codes in the future!

Nice work. Some guys down here in Arizona call coues deer a "poor mans sheep hunt". Sounds like you had that experience!

thats awesome! way to stick it out and get it done! quite the accomplishment

That euro of the carp in your screenshot looks like a great deer!
You must log in or register to reply here.

One for the Memories